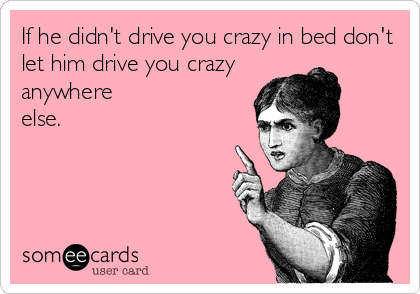 And don’t I know it… along with several of my girlfriends (single, dating, married etc.). As I’ve experienced more of the single world, and spoken more openly to women, I’ve realised we aren’t always/only the crazy ones, as we’re so quickly portrayed to be. 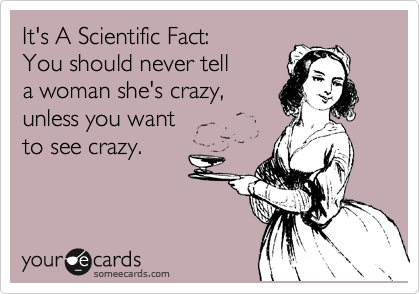 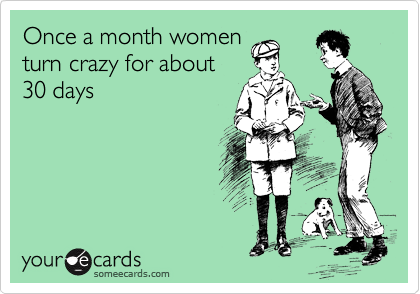 I’ve lost count of the amount of times I’ve heard stories about great girls that turned psycho, were too keen and just didn’t know when to step back or shut up. They’re always labelled as crazy. I get it, and sometimes, I agree (I have heard plenty a story from my brother and guy friends), the female of the species can be a little on the scary side. But you (I’m talking to the guys here) can also a) make us that way b) not care enough or c) play the crazy card, even if it’s not valid. If a woman cares too much, you think she’s crazy. If she calls too much, she’s crazy. If she wants to see you more than usual in a week, she’s crazy.

But if a man does any of the aforementioned, he’s sweet. He cares. He’s into you. He’s good at showing his emotions. You should be grateful because ‘most men aren’t like that’. You should feel lucky to have him.

But why is that okay? I was recently talking to a close male friend of mine who was hitting the dating scene hard, and determined to find himself a ‘good wife’. He talked about gender roles, in particular in dating, and how there is a way each party should behave.

If a girl messages for a follow-up date, she’s too keen. If she cancels, she’s disrespectful. If she likes the finer things, she’s high maintenance. If she has a past, she’s not marriage material. If she has opinions, she’s obnoxious. And all of these things will ultimately make her crazy.

Switch over to the other side. I dated a guy briefly who happened to be the first I’d ever dated who lived very nearby. After becoming quite the long distance aficionado over the years, seeing a guy who lived ten minutes away read like a dream on paper.

But when, within two weeks, he insisted on us spending every free moment we had together, panic set in that he could (and most probably would) turn up on my doorstep unannounced. ‘I pass your house on my way to the gym. That’s a good incentive for me to work out then come to yours after.’ Crazy. 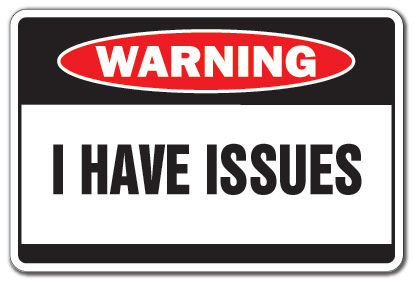 A friend recently told me about an old-complicated-flame-turned-good-friend. They ultimately would never work out, and she was smart enough to know it. But in order to compensate, he suggested (wait for it…), they have a baby together, because he ‘knew how much she wanted kids’. Thankfully, her initial reaction was the same as mine: what the f—. No thank you very much. Definitely crazy.

But my second thought was – if a woman was to suggest to an ex, ‘I don’t want to be your girlfriend, but will you be my baby daddy’, I’m pretty sure he would run very fast in the opposite direction.

Maybe some of it comes down to expectations and (I hate this phrase) gender roles. Traditionally the man is expected to do the chasing and the wooing, and the woman is meant to be demure and coy, not showing much attention and allowing the air of mystery she gives off to attract the man. But things don’t work like that anymore. We women are far more forthright and our dating game is very different from our mothers’ (if they played at all), but to be honest, we’re winging it too. Some men prefer a more old-fashioned approach, and like to wine and dine the lady, who is quiet and painfully elegant. Others like a woman with gusto, confidence and a silly sense of humour.

But we women are also all now aware of that awful crazy label. And we constantly try not to be stamped with it. Of course, it doesn’t always work, and I don’t think I know any women without a track record (even if my friends tell me they’ve never turned even a little bit psycho, I won’t believe them).

But that’s just it – at least we admit it and laugh about it (after we’ve scared the shit out of you and you’re afraid we’re going to turn up at your house at 2am). You guys should try it. Think back to a time and a girl you really, really liked. Maybe she wasn’t as keen as you, or met someone else, or just went cold. But you sent her messages without purpose and thought up ways to get her attention. You thought long and hard about what you should say in your messages, how long you should wait between messages and whether it was okay to send another if she hasn’t replied to the last one (this depends by the way. There is no standard right or wrong answer). In case you’ve never realised, that is all psycho behaviour. Just saying! So when you remember that guy, even if it was as recent as last week (okay, maybe that’s too soon), I hope you want to laugh at the sheer embarrassment and madness of it all. If so, good for you. Now go tell your friends so they can laugh at you, too.

N.B. To (certain) past boyfriends: Sorry. 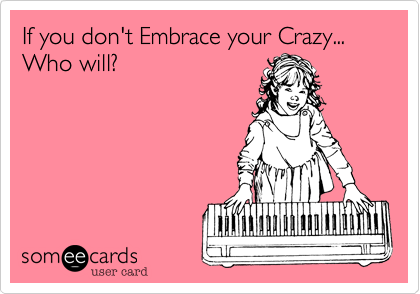 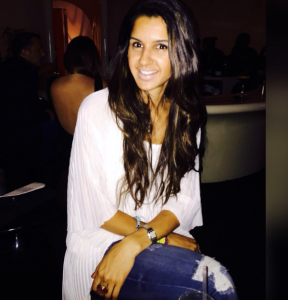